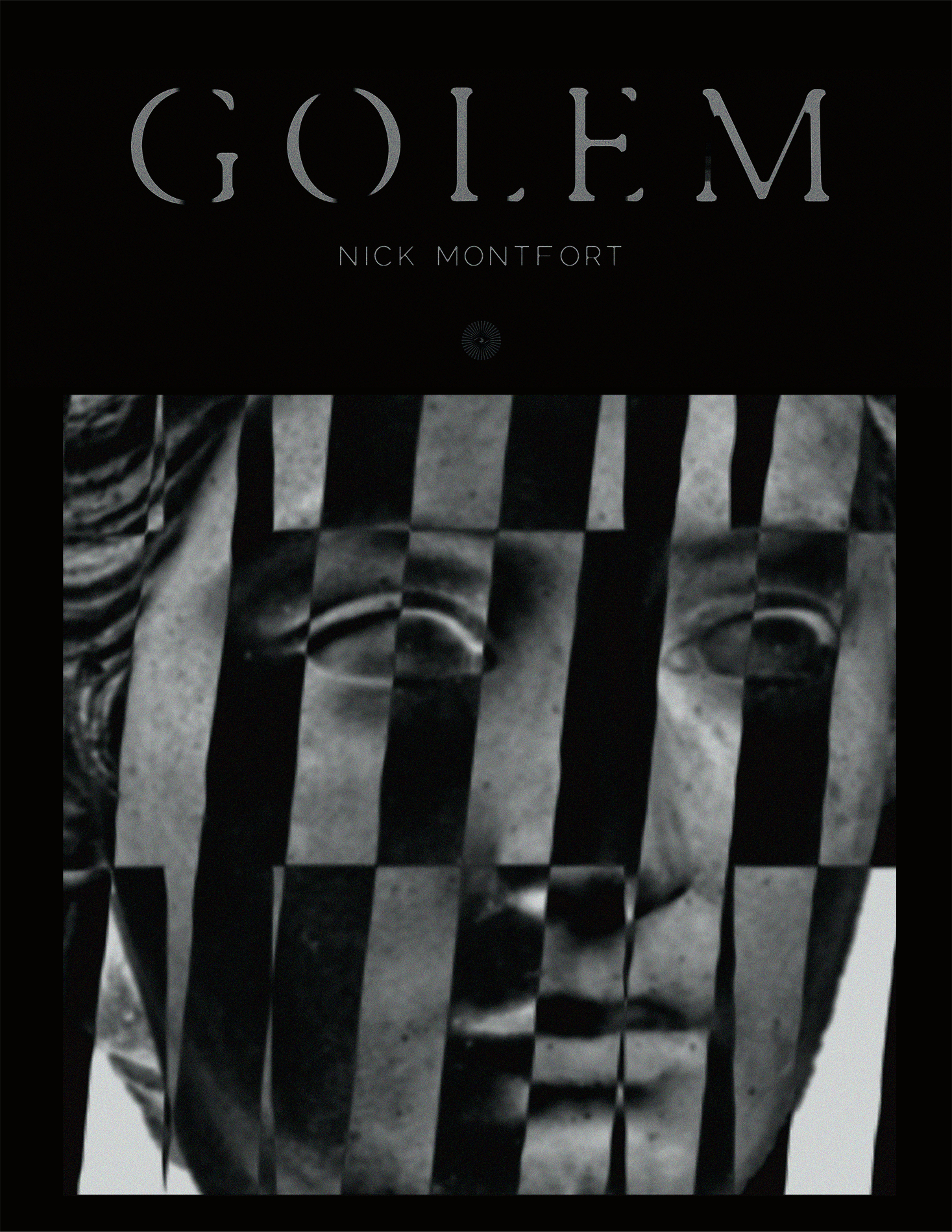 ...and in thy book all my members were written,
which in continuance were fashioned,
when as yet there was none of them.

Shaped of silicon and animated by language, this slim computer-generated book seems at first to be built of increasingly complex progressions of similar, cycling sentences. Some of them, even though they are syntactical, seem so elaborate as to exceed human understanding. Nevertheless, the way each section is stamped out seems easy—at first—to discern. Is the text doing something other than shuffling about, dumb? What of the parts of it that are written in a script more arcane than English, in code? Even expert readers who have encountered extensive traditional, constrained, and conceptual writings may find much in this computational project to challenge them. They may also be surprised by what they eventually unlock.

“As an exemplar in computational text generation, Golem captivates with a strangeness that is also recognizable—it is a proliferation of the sentence. Sense and sensing form the affective core of this unique book. Golem is a book of encounters with feelings—the visceral forces that frame and stimulate the great breath of human interaction and (mis)understanding. Referencing the golems of old, there is no speech or speaking by these generated characters, yet in Montfort’s hands they theorize new affective relationships when they ‘verb’ and ‘object’ one another and are rendered exhaustive and beautifully articulate.”
—Lillian-Yvonne Bertram, author/programmer of Travesty Generator

“The mentor remembered memories: subject, verb, predicate, in a narrative that seems ‘easy at first,’ but soon the repetitions, permutations, mysteries, dislocactions, collisions, contradictions, betrayals, disappearances are leading the reader down the most unexpected of (parenthetical) paths. If Gertrude Stein had known how to use code, she might have ‘written’ this Golem. Fortunately, her alter ego, Nick Montfort, steps up to the plate, here producing what John Ashbery, with Stein in mind, called an ‘open field of narrative possibilities,’ a truly gripping tale—but about what, precisely? Golem is the perfect (re)reading matter for our moment of lockdown in the face of pandemicity. Catch Charlie and Em, if you can!”
—Marjorie Perloff, author of Infrathin: An Experiment in Micropoetics

“Like all great art, unraveling the secret of Nick Montfort’s Golem invites us to consider where we, the reader, find ourself in its central analogy. It reads us into its riddle. . . . Golem is an astonishingly rich work of text generation in both the creative and procreative senses.”
—from the postword by Zach Whalen, author/programmer of An Arthrogram and @ROM_TXT

“A rewarding expedition on the branching paths that connect grammar and code. While Zach Whalen’s lucid postword attends to the text’s recursive clockwork, Montfort’s Golem invites equal appreciation for its sonorous lexical and syntactic counterpoint.”
—Allison Parrish, author/programmer of Compasses and Articulations

Nick Montfort has generated books that include #!, 2×6 (with six collaborators), Autopia, and The Truelist. Among his digital collaborations are The Deletionist and Sea and Spar Between. He edits Counterpath’s series of computer-generated books, Using Electricity. He has six books out from the MIT Press, with a new edition of Exploratory Programming for the Arts and Humanities coming in May 2021. Montfort is professor of digital media at MIT, where he directs a lab/studio, The Trope Tank. He lives in New York.

The NEW SIGHT series is a collection of computer-generated novels designed into physical artifacts. This series is our exploration of the possible futures that lie at the intersection of technology and the book form.

An imprint of Dead Alive, a digital space dedicated to supporting the future of digital art through collaborative experiments.